How can entrepreneurs be encouraged in plastic waste businesses in our city?

I want to encourage entrepreneurs and youths with innovations that provides adoptable cultures in plastic waste to know how to be engaged in processing plastic waste into commercial products and management to curtail flooding, improve soil texture, clean water and cities. 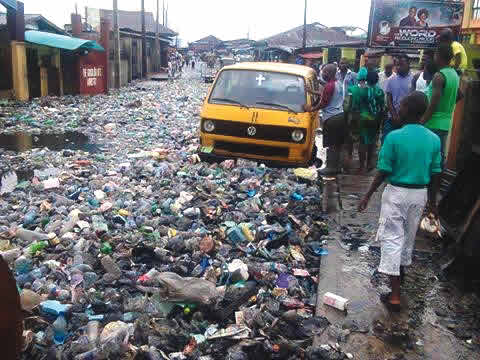 Disposal of plastic waste is on the increase in our city on a daily bases, affecting the environment in so many ways.

And there is no physical structure or a system put in place either by government or individuals to management waste in order to address these challenges.

Human attitude has contributed significantly to the menace, and over 65% of people will still dump on the street or waterways even if you share collection bags and offer to pick them for free.

As a result, waterways are blocked and negative changes occur on our soil, coursing flood, affecting agriculture, health, hygiene, and damage on the environment.

80% of the waste that remained un-decayed is plastic waste, and lays around every corner of the city, making the whole environment unhealthy and inhabitable. I want to encourage entrepreneurs and individuals to come up with entrepreneurial innovations that provides adoptable cultures in plastic waste, either PET or plastic bottles, cans and water sachets processing into products in different forms like, synthetic fibres, cotton, ropes, toys, bags, rubbers, plastic, etc, that are needed in our society for daily consumption and or management to curtail flooding, improve soil texture and clean cities.

The products could be main for architectural finishing works like on-lays, trims wall panels, flooring panels, ceiling panels and molds making for concrete and resin castings, decorative appliques, tick sheets for furniture works, etc. One person doing this alone in the city, cannot make or create much impact, compared to the level of waste dump in every corner of the city.

The rain is still on the sky and they could still be more heavy rains, yet this year, lots of lives and properties worth millions have been lost due to flooding, most of which is coursed by blockages on waterways reference to media reports of 9th October, 2018 on NTA.

What are the potential innovations that individuals, entrepreneurs, organizations and institutions need to explore from the plastic and polythene waste, that is on the increase on a daily bases in our cities, is what Pick the Can is out to address.

Report of flooding across various cities in Nigeria has been on media recently. One of such report was published on the Punch Newspaper of 11th August, 2018 indicating the damages coursed by flood in Kasina state and that of July 13, in Ogun state were 11 persons reportedly died and properties perished in flooding at Abeokuta, the Ogun State capital. Among the deceased were a food vendor, Halirat Akintobi, and her two sons. About 750 buildings were affected while 6,030 persons were displaced according to the National Emergency Management Agency.

The authorities blamed the flooding on indiscriminate dumping of refuse in drainages and canals.

These has been happening on a yearly bases. The situation continuously became worst and government over the years has fail to provide a structure like a waste management environment that is adoptable in our cities and communities in the country.

A report released by the Lagos State Government in 2017 stated that less than 30 per cent of over 13,000 metric tons of waste generated in the state daily is recycled. A rapid increase in the population and number of plastic-based products has also made waste management taxing. Many beverage companies that hitherto produced with crystal bottles have changed to PET bottles to cut cost.

It is common to see people burning waste materials, including plastic, in a desperate attempt to get rid of rubbish from their surroundings. Sadly, most of those who do this unwholesome practice are ignorant of its health implications.

Lawani and Amusa are two of a few individuals who have ventured into small scale recycling in Nigeria as evident in the large percentage of unmanaged waste plastic across communities in the country according to Punch Newspaper, indicating that something is still missing along the line.

Pick The Can is going to continue as an initiative to draw entrepreneurs, individuals, organizations and institutions to a knowhow in plastic waste management in a view to breed a force that is ready to tackle waste management challenges professionally.

Other challenges from this city

How can entrepreneurs be encouraged in plastic waste businesses in our city?

I want to encourage entrepreneurs and youths with innovations that provides adoptable cultures in plastic waste to know how to be engaged in processing plastic waste into commercial products and management to curtail flooding, improve soil texture, clean water and cities.